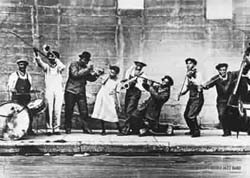 Basinstreet.com, was brought online in 1994 by Dr. Karl Koenig, Ph.D, and is dedicated to the preservation of early jazz history.

Where did jazz come from and who started it? 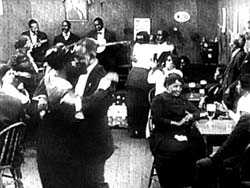 Early jazz originated as dance music and was influenced both by the existing dance music as well as the orchestras of the late 19th and early 20th century. Jazz’s musical heritage was mostly European, which became increasingly influenced by the American Negro music that augmented it. The dance orchestra became enlarged from the ‘Quadrille Orchestra’ (violin, flute, clarinet, trumpet & string, bass) into what was called the ‘Society Orchestra’ or ‘String Band — adding trombone, piano, trap drums and later, saxophones. 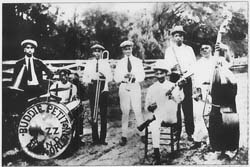 Basinstreet.com offers a plethora of books on early New Orleans jazz history, presenting information that has been painstakingly researched by Dr. Koenig from previously uncovered areas related to the historic beginnings of jazz.

Basinstreet.com strives to provide jazz scholars, historians, and educators with information related to the early history of jazz which may not be readily obtainable through other sources. We hope you enjoy your visit, and feel free to email Dr. Koenig with any questions you may have related to early jazz at k.koenig2@yahoo.com

Jazz researchers and other readers will now be able to access all material on the site free of charge. If you quote or use the material in your work we ask you give credit to the site. Donations will be welcome and can be sent to PayPal in my name, Karl Koenig – drkjazz@basinstreet.com

There is a large amount of new books that are now on the site. The new files are: Band Conductors in old New Orleans; City, Audubon & Athletic Parks; Carrollton and Magnolia Gardens: Tango Belt: West End and Spanish Fort: St. Roch Playground Bands; History of Concert Bands in New Orleans; and short files on Negro bands, and essay on Bessie Smith, Bessie Smith & Ma Rainey. and a few others.

These new files are large, numbering 2747 pages. Band Conductors include 57 early band conductors that played around New Orleans. Most include photos of conductors and their Bands, and the programs performed.

Locations that these bands played are in files: City, Audubon, and Athletic Parks; Bands playing concerts at the city’s playground -an example of one is St. Roch Playground; Also a history of the bands playing in the New Orleans resorts of Spanish Fort, West End, and Carrollton and Magnolia Gardens.

Also included is the history of the Tango Belt – an area that was important in the development and evolution of early Jazz. There is included some short info on: Mamie Smith and some material on the Excelsior Band.